Refrigerants are used in many applications such as stationary and mobile air conditioning and refrigeration systems. A commonly used refrigerant such as R134a has a low Ozone Depleting Potential (ODP) but relatively high Global Warming Potential (GWP) of 1400. In recent years there has been substantial growth in refrigerant used for cooling applications. 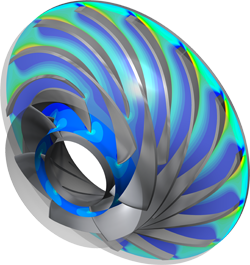 For example, between 2002 and 2010 the refrigerant used has grown from 450 M Tonnes to almost 1100 M Tonnes of CO2 equivalent. This rate of growth is expected to continue to increase as a result of new applications such as domestic heat pumps and Organic Rankine Cycles.  As a result, the EU has introduced legislation to phase out the use of high GWP refrigerants such as R134a by 2030. R134a has already been banned from mobile (automotive) applications in Europe and are being incentivised out in the US. The use of low GWP refrigerants such as R1233zd has major implications on the design of compressors.

In our webinar, we show how using the different modules in TURBOdesign Suite you can design high efficiency compressors rapidly from scratch. We use an example of a small heat pump and show the following design process:

We provide software and services for the design and optimization of turbomachinery, based on our unique 3D Inverse Design technology. Our tools and services help customers achieve innovative “breakthrough” designs, delivering market leading solutions at dramatically reduced development costs.

ADT, headquartered in London, UK, was established in 1999 as a joint venture between University College London and The Ebara Research Co Limited of Japan. We are considered as one of the leading global turbomachinery design software providers, with our TURBOdesign Suite tool set in use across a very wide range of applications and sectors.

Our design consultancy services deliver cutting-edge solutions to our global customers. Whether the task involves a complete solution, from concept to final design for manufacturing, or is facing challenging multi-point / multi-objective design optimization, we work closely with our customers and support them throughout the entire design process.

Book an exclusive one to one demo