ADT has been working with all major chiller manufacturers, the majority of which use TURBOdesign Suite, to help them upgrade their range of chiller compressors. 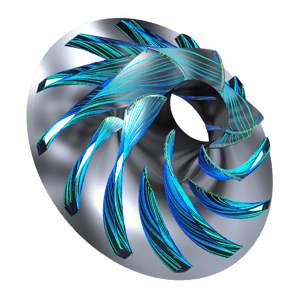 This design for a single stage compressor using refrigerant r1233zd(E) had to meet very wide operating range requirements, a relatively high pressure ratio of 3.5:1 and high efficiency. The high-speed compressor being driven by a high-speed permanent magnet motor and magnetic bearing ended up having a very small exit, which made the control of leakage flow a very important aspect in achieving the target efficiency of more than 80%.  The whole stage was designed by using TURBOdesign Suite.

To begin with, TURBOdesign Pre was used for initial sizing of the compressor and to optimize the rpm in such a way that the efficiency was optimized at all key operating points. Then TURBOdesign1 was used to optimize the impeller blade shape. Impeller stresses and modal frequencies were verified by FEA analysis. For maximum efficiency a low solidity vaned diffuser was designed by using TURBOdesign1 and, finally, the volute was designed by TURBOdesign Volute. CFD results confirmed that the stage met the required efficiency and wide range targets. The CFD results were later confirmed by test results.

In this case the compressor used refrigerant R1234ZE. The two-stage compressor had a back to back configuration and the design requirements included targets for 100%, 75%, 50% and 25% rated conditions for both stages. The aim was to maximise both COP and IPLV. 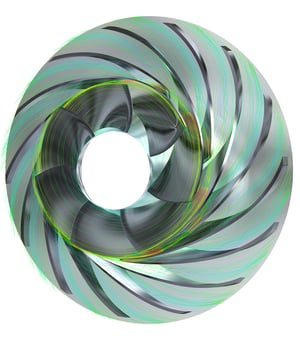 In this case the new Cycle code was used in TURBOdesign Pre to establish the ideal RPM and design point for each compressor, and also to balance the pressure ratio (work split) between stage 1 and stage 2 in such a way that COP is maximised and the IPLV conditions are met. Once the speed and the compressor flow path were obtained from TURBOdesign Pre, then TURBOdesign1 was used to optimise the impellers with vaneless diffusers and the volutes were designed with TURBOdesign Volute.  Complete CFD analysis of the whole two-stage system, including a representative roughness model of each component, confirmed that the new design meets all the design requirements in terms of efficiency at design and part-load conditions.  FEA analysis was performed on the designed impellers to verify their structural integrity. The system is now being manufactured for testing.

In this consultancy summary, the stage efficiency was improved by up to 5 points with improvement in stable operating range.