One of the leading manufacturers of turbodrills for the oil and gas drilling industry asked ADT to carry out the complete redesign of their existing hydraulic drilling turbine to suit different types of rock formations with a single design.

Turbodrills, multistage axial turbines with rotor and stator configuration that can have as many as 150 stages, are used for specific applications in oil and gas drilling. They use the fluid required to clean the borehole to drive a turbine to turn the drill bit. Conventional turbines run at relatively high speeds / low torques, which limits their applications to specific rock types. The performance targets set by the customer for this project requested an increase in torque at the low operating speeds and a low runaway (zero-torque) speed to ensure the safety of the drill-line and surrounding components. 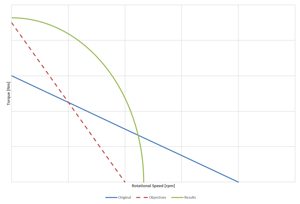 The overall sizing of the turbine being fixed by the requirement within the borehole sizes. ADT investigated various possible meridional, including repeating mixed-flow designs to evaluate the potential for achieving high torque with low runaway speeds but unfortunately, the results showed that any conventional design could not meet the target requirements and novel avenues that needed to be explored.

ADT used the 3D inverse design code TURBOdesign1 to design a number of rotor/ stator configurations with varying design flow, rpm and meridional channels to understand the design parameters that most influenced the slope of the torque characteristic curve for oil and gas drilling.

There was very careful control of the blade loading using TURBOdesign1's inverse design method that enabled the flow to remain stable at low rpm. This produced high torque while inducing a controlled separation at high rpm that reduced the torque obtained without any other adverse impacts to the turbodrill, such as vibrations or blade erosion. 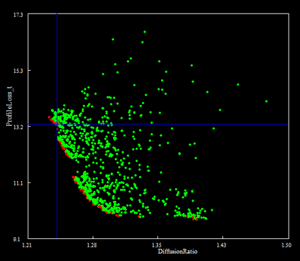 The final design provided +30% more torque at low rpm, whilst simultaneously reducing runaway speed by -10% compared to the traditional design.

The final phase of this design project included using automatic optimization to improve the stage efficiency. The blade geometry used in TURBOdesign1 is parameterized by using the blade loading (as shown in Fig. 2) and TURBOdesign Optima is used to run Multi Objective Genetic Algorithm (MOGA) to explore the design space and create a Pareto front of contrasting design objectives. 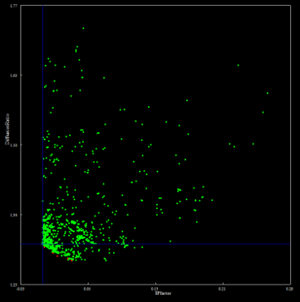 TURBOdesign1 parametrizes a fully 3D blade shape with only a few design parameters (Fig. 2) and also provides detailed 3D inviscid surface pressure and velocity information, using ADT’s correlations based on the 3D inviscid flow fields it is possible to run hundreds of designs in less than one hour and achieve a well-defined Pareto Front (Fig. 3) clearly showing the trade-off between loss mechanisms.

The turbine stator and rotor blades were parameterised using 8 blade loading parameters and also including the number of blades, the optimization objectives were to minimize the profile losses and diffusion ratio for the stator and secondary flows and diffusion ratio while maintaining profile losses below the baseline blade for the rotor. The resulting Pareto Fronts are shown in Fig. 3 and 3  for the Stator and Rotor respectively.

The optimised stage geometries, compared to the original stage design, resulted in a turbodrill turbine stage that produced 19.3% more torque, provided a 6% higher Total-to-Static stage efficiency and also resulting in 10.5% reduction in axial thrust while presenting the same level of Total-to-Total Pressure Drop. 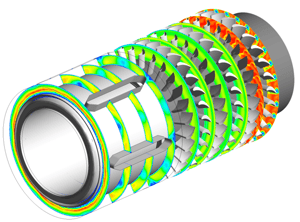 Would you like to discuss your current turbine design software and design strategy?

Get in touch now and learn how you can optimize your design process.

Complete the short form below and a member of the ADT engineering team will reach out to you.

Franklin Electric is a global leader in the manufacturing and distribution of products and systems focused on the movement and management of water...

ADT will be part of the IMECE® 2021 Conference

Prof. Mehrdad Zangeneh will be part of the Track Plenary Speakers at the IMECE® on November, 2nd at 12:35pm. ASME's International Mechanical...