The previous paper describes the design of the blade geometry of a medium specific speed mixed flow pump impeller by using a three-dimensional inverse design method in which the blade circulation is specified. This paper discusses how using flow visualization and phase-locked measurements of the impeller exit flow, in order to validate the effects of secondary flow suppressions.

The paper describes in detail the effects of tip clearance and the number of blades for inverse designed impeller are also investigated experimentally and numerically.

Each blade of the inverse designed impeller was manufactured from a block of bronze material by five-axis numerically controlled milling machine, and thus manufactured seven blades were stacked into a hub to form a seven-bladed impeller. The impeller was also tested under a five-bladed configuration by replacing the hub. The front shroud was removable and so the effects of the tip leakage flow were also examined experimentally.

The present three-dimensional  inverse design method does not take into account the effects of tip clearance. However, both shrouded and unshrouded impellers are widely used, and there are also a number of studies that show the dominating influence of the tip leakage flow on the three-dimensional flow patterns, such as a a jet-wake flow formation pattern.

In part 1 of this paper, a medium specific speed mixed flow pump impeller was designed by a fully three-dimensional inverse design method. The objective of the design was the suppression of the secondary flows on the blade suction surface, which could be the cause of exit flow nonuniformity and the instability of the impeller.

In this part, the internal flow fields of the inverse designed impeller was investigated experimentally to confirm the capability of the present three-dimensional inverse design method, especially in terms of suppression of secondary flows on the blade suction surface.

It is well acknowledged that secondary flows play a very important role to produce the exit flow nonuniformity such as the jet-wake flow pattern at the exit of the  centrifugal and mixed flow turbomachines. This phenomenon often deteriorates the performance and the stability of the downstream diffuser and the stage. It is also possible to minimize the loss generation by the careful choice of the input specification in the inverse design method.

Mehrdad Zangeneh is Founder and Managing Director of Advanced Design Technology and professor of Thermofluids at University College London. 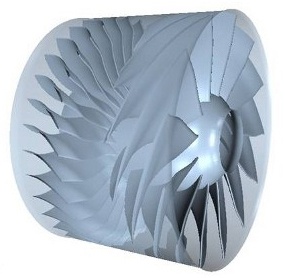 The paper describes the design of the blade geometry of a medium specific speed mixed flow pump impeller by using a three-dimensional inverse design...

The customer, one of the leading suppliers for aerospace companies, asked ADT to carry out the complete aerodynamic design of a radial inflow turbine...