A Closer Look at the Impact of Optimization of Ducts, Intakes, Exhausts and Volutes on Reduction of Aerodynamic Noise and Vibration in Fans and Blowers

Aerodynamic noise is a rising source of concern for fans and blowers manufacturers across all industries, but particularly so in domestic appliances applications.

Considerable development effort is dedicated to improving the design of fan rotors to meet the contrasting requirements for high efficiency, high pressure rise and low noise. The developments in Computational Fluid Dynamics (CFD), Computational Aeroacoustics (CAA) and experimental measurements in Anechoic chambers have improved our understanding of the sources of noise in fan and blower rotors. However, the design of fans with improved efficiency and lower noise and vibration still requires considerable computational and experimental resources and relatively long development times. In an earlier article [1], it was shown how by using an inverse design based optimization strategy it is then possible to cover a large design space by relatively small number of design parameters for the fan rotor and hence reduce considerably the computational resources required to optimize the fan or blower rotor geometry for both lower noise and higher efficiency.

One of the major sources of noise and vibration in appliance applications is the so-called installation effects caused by the interaction of non-uniform flow generated by intakes, ducts and exhaust pipes or volutes with the fan/blower rotor. Optimization of these components can have a significant impact on the overall noise levels from fans and blowers. In this article, mainly the design optimization of stationary components such as complex intake ducts and exhaust scrolls will be considered. 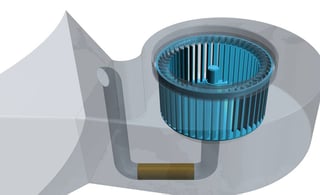 Forward curved centrifugal fans or so called Sirocco fans are used in many applications where relatively high pressure rise is required in a compact size. A typical Sirocco fan is shown in Fig. 1, taken from reference [2]. The picture clearly shows the rotor inside the volute. The design of the volute has a major effect on the overall blower efficiency as well as noise level. The conventional volutes are normally designed with rectangular or elliptical cross sections. But the main aspect of the design that affects the noise and efficiency of the blower is the variation of cross section area between the tongue region and the exit plane of the volute. In conventional design the scroll is normally designed by using a 1D method based on conservation of mass and angular momentum between inlet and exit of the volute and generally a linear variation in cross section area is assumed. In order to optimize the volute geometry a new design method was used, which is based on a 2D inverse design approach. In this method, the volute geometry is designed for a given distribution of circumferentially varying radial and tangential velocity at the volute centerline inlet. So the resulting area variation can be directly obtained from the actual flow field at the inlet of the volute. 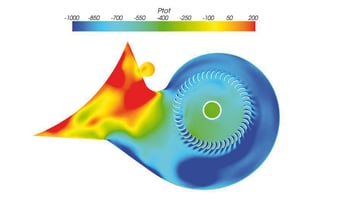 This new approach uses a 2D streamline curvature approach on the volute centerline. It starts with an initial geometry obtained from a 1D method such as conservation of angular momentum approach. The problem is then solved subject to the specified inlet Vr and Vθ distribution at inlet to the volute. The mass flow on each quasi-orthogonal is found and this is used to establish the bounding streamline for that section which is then used to define the new volute wall. In this way the volute area variation is established around the circumference. The method can result in quite unconventional area variations that deviate strongly from typical linear variations found in conventional 1D design for these type of volute.  In Fig 2. the predicted stagnation pressure at the center line of the new stage is compared to the baseline, conventionally designed, stage. The results show significant reduction in variation of stagnation pressure circumferentially as compared to the conventional stage which should help to reduce noise. In fact Power Spectral Density prediction along a region in the volute tongue showed improvements of up to about 15 dB in the inverse designed stage. Furthermore, the prediction also show a 25% reduction of the pressure loss in the volute from 249 Pa in conventional design to 194 Pa in the new inverse designed volute.

There are other important components in fans and blower such as intake ducts and bends that have a major effect on performance and noise/vibration in fans and blowers. For example in the case of the S-Bend shown in Fig. 3 significant flow uniformity can be observed at the exit from the duct. This flow non-uniformity can then interact with any downstream fan or blower and cause noise and vibration. So it is essential to try and improve the flow uniformity at the exit from such ducts and intakes. However, these geometries are usually quite difficult to optimize by manual iteration by using the CAD model of the duct or 3D Intake. The correct representation of an arbitrarily complex surface requires a high number of design variables, which increases the computational cost and makes such cases difficult optimize using conventional automatic optimization approaches.

To handle such cases and benefit from the relative potential performance improvements, a method is required that will be independent from the number of design variables. Another problem is the efficient and automated parameterization of these complex 3D geometries. It is straightforward to use control points (e.g. of NURBS) for simple shapes but very hard for arbitrarily complex ones. A solution to this is to efficiently use the nodes of the computational surface mesh on the geometry, after discretization. In this way, all nodes laying on the surfaces subject to optimization can be used to modify the geometry. 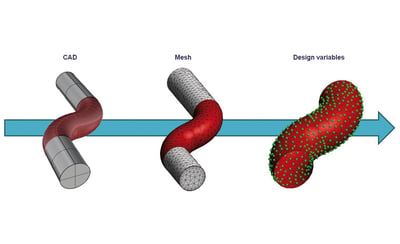 Fig. 4 Automatic design variable definition, all the surface nodes on the surface if interest can move.

Such a surface optimization method optimizes the complex 3D geometries with respect to given targets, such as total pressure loss and velocity uniformity. It does so by computing the sensitivities of the geometry itself versus those targets and then modifying it. The method also recognizes the design variables automatically and eases the parameterization of highly complex geometries. The design variables are extracted automatically from the surface discretization of the computational mesh on surfaces that are subject to change. This removes the need for time consuming (for complex geometries) control variable definition. It also allows for the exploration of the full design space and not only a subset of the latter, which results after a poor control point definition. An example of this process is presented in Fig 4 for the S bend duct. 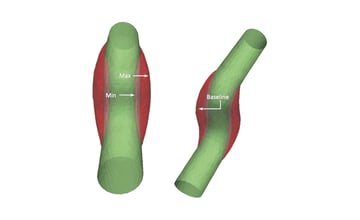 The process starts with the normal CAD geometry and the region of the surface which is going to be defined as a separate surface patch as shown by the red region in Fig. 4. The grey region will not be modified. This is then computationally meshed by any available CFD mesher as shown in Fig 4. All the surface meshes can then move subject to a certain constraints specified by the designer. By defining the design in such a way also enables the imposing of constraints in a very immediate way, which is a unique feature of the surface optimizer. Constraints can be enforced by specifying minimum and maximum movements for each design surface. In this way, manufacturing or space restrictions can be imposed. An example of how the movements of surface points can be constrained is shown in Fig 5 for the S bend duct. 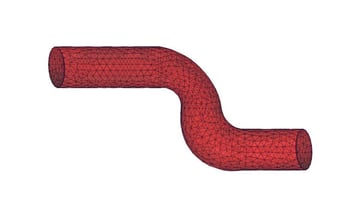 Fig. 6 The geometry and exit flow field of the optimized S bend.

With such an approach, the optimization of complex geometries becomes straightforward. This can replace the trial-and-error methods currently used and provide a means of optimizing complex 3D geometries. By applying this approach to the S-duct bend the geometry was changed in 10 geometry iterations to the geometry shown in Fig. 6. The resulting flow field from the S duct was improved significantly as shown in Fig. 6. This uniform exit flow field can result in significant reduction in noise and vibration of any rotating fan or blower component downstream. This optimization approach for ducts and intakes can play an important role in reducing noise and vibration in appliance applications.

Find out more about our inverse design technology